Rabbits. Lots of them 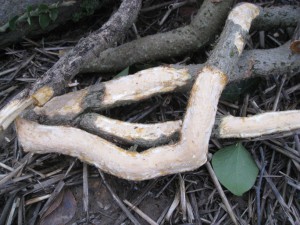 The Oak Tree has rabbits. Lots and lots of rabbits. And rabbits like veg. And in the recent snow, they even liked the bark of some ivy I left lying on the ground after a session of felling dead trees to make ready for new saplings.

So what am I going to do about these rabbits? There are many options for rabbit control, and crop protection from rabbits, none of which seem to be problem free. There is no doubt that rabbits are a promising source of food, with impeccable green credentials. I’m certainly not going to have them gassed, I don’t like the idea of killing them that way, and it is a waste of a useful source of food.

I’ll be putting rabbit electric netting around my vegetable crops, but there is still a big risk of them breaching this and causing a lot of damage. So some sort of control of numbers is needed. I’m going to try humane trapping and possibly drop netting.

If these methods fail I’ll consider either an air rifle, or someone with ferrets. Shotguns are out as I am too close to public roads and footpaths.

Every part of the rabbit will be used, meat, skin (I’ll cure them for gloves, scarves etc) and the bones will be boiled up in rabbit casserole for a rich and very nutritious sauce. I would like to work out a way of converting bones to bone meal to enrich soil, but I am still working on that idea.

email
This entry was posted in general news, pests and tagged rabbits. Bookmark the permalink.