Resilience and The Oak Tree

Late last week, as I harvested the day’s vegetable boxes, I finally accepted that the farm wasn’t prepared for the impending cold weather. Harvesting had been slow and difficult all week, and that day the ground was starting to freeze, which made harvesting leeks extremely tricky. I sent out a message to CSA members to say there would be no vegetable harvest the following week, something I did this with a very heavy heart, as one of my goals for the CSA is to supply vegetables to members all year round.

Remember the other year when there was a national sprout shortage due to the problems of harvesting by machine in the snow? I had felt really chuffed because I was still harvesting sprout stalks (which can survive being harvested while frozen, unlike individual sprouts) by hand, in the snow, with a hacksaw.

Leeks in the snow - next year we'll heel them in so they can still be harvested.

I had, of course, thought about the potential challenge of cold weather while planning our CSA vegetables a year ago. The winter of 2010/2011 was a harsh one, so I had had plenty of opportunity to think about the difficulties of supplying vegetables during a cold snap. That year I had managed to deliver some vegetables during the snow to the Ripple Food Coop by walking my bike trailer three miles from the farm to the town centre (I didn’t dare cycle or drive in the ice) because it was very important to me to be able to supply food in all weathers (now the farm veg is supplied only to CSA members, not to the Ripple coop, this was before our first CSA veg boxes). 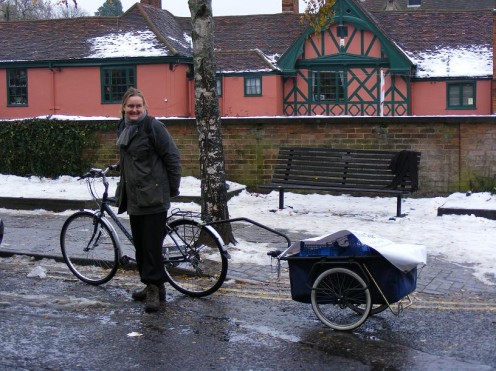 The effort of walking all that way in the ice certainly wasn’t justified by the money the vegetables sold for, that wasn’t why I did it. I did it because it is extremely important to me to supply vegetables all year round without using energy intensive refrigeration in the summer, or heated stores through the winter. In the summer the solution is to supply only very fresh vegetables so they don’t have time to wilt in the heat. If it is really hot I spray them with drinking water to keep them cool, but apart from that the only fridge they will see is that of a CSA member.

CSA member Steve, in the photo at the Ripple Food Coop above, kindly listened to me ranting about how utterly frustrated I was at not being able to harvest this week, while supplying me with a consoling pint of beer in the Dove at the farm social on Tuesday. Thanks Steve!

My plan for the winter was to be able to supply root vegetables, brassicas (sprouts sticks and cabbages) leeks, and possibly salad leaves & squash through even the coldest patch. My plans simply didn’t work out this year, but this makes me all the more determined to overcome these problems so we all enjoy a generous and varied harvest in the snow next year!

What happened, and what are going to do about it?

A number of things came together to prevent the cold weather harvest this week:

Learning from this, there are a number of things I propose to do this year to make our vegetable supply better through the winter of 2012/2013:

We’re experimenting with storing root vegetables in the soil over the winter, covered with a generous insulating layer of straw. The carrots were the one crop that probably could have kept going through this week. When I looked under the snowy straw earlier this week they hadn’t frozen, and looked fine. I’ll check again (nervously!) tomorrow. Our soil is very sandy and free draining, so this method of storage (which is used by some large scale carrot growers locally) is very similar to the traditional method of storing carrots in slightly damp sand in a frost-free place. If this doesn’t work, then they’ll need to go into some sort of frost-free storage in sand – either an underground root cellar or a straw bale clamp.

Thank you to all the kind CSA members who got in touch to say “don’t worry” about the pause in harvesting this week – I really appreciate your support. We’ll do better next year, I promise, thanks to warm summer days spent building polytunnels and stores and weeding our winter crops in anticipation of the next cold weather harvest.