The BBC couldn’t make up its mind about today’s weather. They got it more right last night in that it was going to be wet than they did this morning, when they said it would be okay apart form one or two showers. It was wet.

It was time to move the chicken house. This weighs a ton, the trick is probably to make the house out of shiplap rather than weatherboard but so be it. It needed wheels at the heavy end. Wheels are quite dear – a couple of wheelbarrow wheels would do the trick but would come to over £50, and there are thorns on the field which sometime cause punctures. So we tried sawing some wheels out of round-ish logs. The whol thing ends up looking very Fred Flintstone and doesn’t give the smoothest ride, but in the end the unevenness of the field is more than the eccentricity of the wheels. So the axle holes were made with a 30mm spade bit; it would have been easier with an auger bit but that would have been nearly £20. The holes aren’t terribly precise, and used up two batteries of the cordless drill because the wheels are made of seasoned elm. 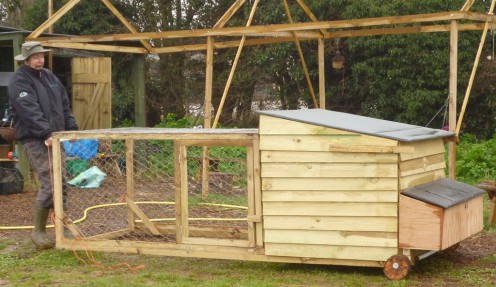 Wilma with the new set of wheels

It wasn’t too bad down the bottom where the ground has been compacted, but then it was time to haul this up the field into pole position fo the arrival of the chickens, so it needed to move up to near the muck heap at the top of the car parking. Which was about a 300m run, across rotovated ground and then across tussocky pasture. You need to put a lot of back into moving this on that surface. 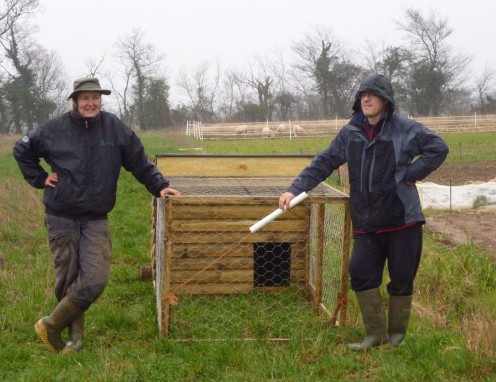 Joanne and Eric after getting the chicken house over the veg beds, taking a breather and thinking 'that was hard work' while the pigs chomp contentedly in the distance

So far so good. Unfortunately the Luftwaffe went and bombed a crater in the way, so it was an easy-ish ride down the hill and a hell of a yomp up the the other side with a grade of about 5%.

head-scratching all round 'how the heck do we budge this thing then'?

Take # 1 wasn’t successful, though it was funny 🙂 Lesley took inspiration from the venerable farm horse. The human upright stance does us no favours as a source of motive power!

In the end it was brute force that won the day. The coop won’t be run up this incline in nrmal use so we can live with the multi-person effort required to get it out of the crater.

Eric then did a great job in reinstating some of the path through one of the steaming piles of muck that we got from Capel on Thursday. 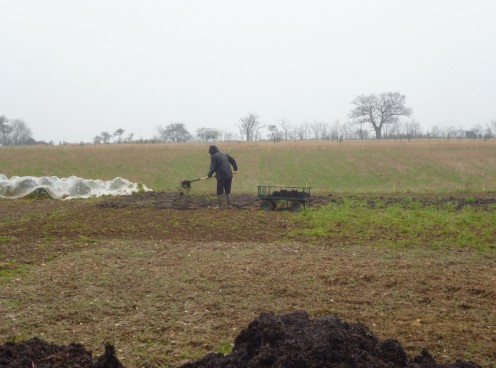 email
This entry was posted in general news, working party. Bookmark the permalink.