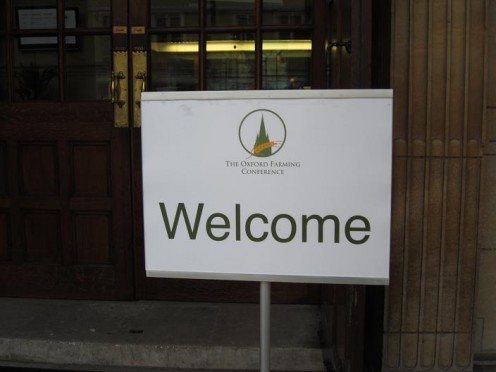 This event had rather more suited chaps than the ORFC 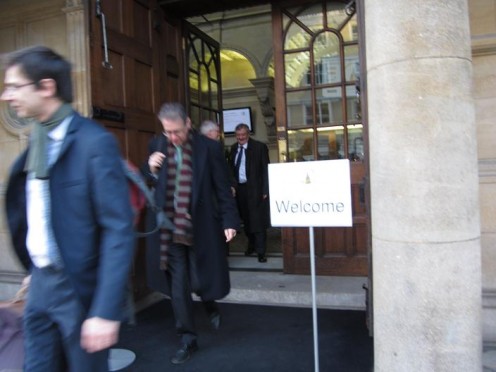 Aparantly GM is the future…

Back to the “Real” conference. I was really very over-excited about going, and I sat at the front of the top deck of the bus into the city centre with a big grin on my face. And I wasn’t disappointed.
Here are the highlights of day 1 (of two days) for me.
Colin Tudge on the new “College for Enlightened Agriculture”
Colin Tudge is a pretty amazing chap. I am reading his book “Feeding People is Easy” at the moment, and his training as a biologist, his experience of researching and writing about farming and related topics, and his passion for addressing the many deep and fundamental problems of contemporary agriculture is inspiring. He is also a friend of the marvellous Prof. Martin Wolfe of Wakelyns Farm, which automatically endears him to me! 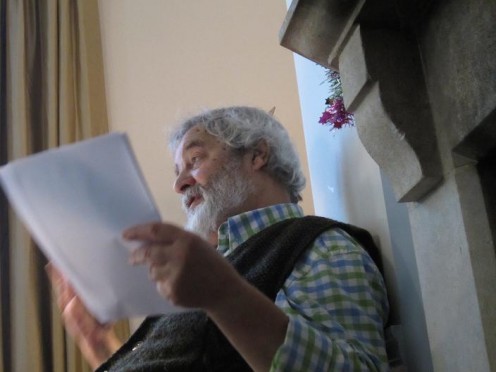 If you’d like to read more of his ideas from the man himself, why not start with his reflections on the ORFC here?
http://www.campaignforrealfarming.org/2013/01/the-oxford-real-farming-conference-2013/
The room was packed, so I sat next to the great man himself, in a fireplace at the Turl Street Kitchen venue. He graciously pulled a piece of tinsel off my head when it fell off the mantelpiece. 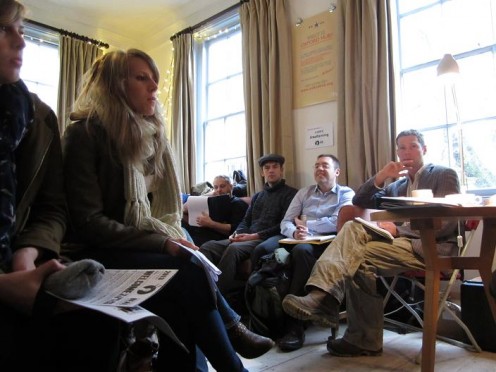 Standing room only at the Colin Tudge talk

Colin’s plan is to set up a proper educational establishment to teach proper agriculture, that is agriculture that will feed people forever. He sorting out the details of launching the college at Schumacher College near Totnes in Devon, and is in talks with a local farmer about setting up a demonstration farm not far away. Sounds like an excellent idea. I introduced myself to Colin at the end of the session and he mentioned he would like to visit The Oak Tree when he is in the area to visit Martin Wolfe. It would be fantastic to talk with him about our plans for the farm, and his ideas on the wider picture of agriculture.
Steve Merritt of the Welsh Poultry Centre
Attending a session with Steve was another of the highlights of the conference for me. I had only encountered his website the week before, and had almost immediately bought his e-book, “The Free-Range and Organic Poultry Handbook”. I’m not parted from my cash online readily, but Steve’s book was well worth the money, answering many, many questions I had been asking about raising meat chickens for sale in the UK. 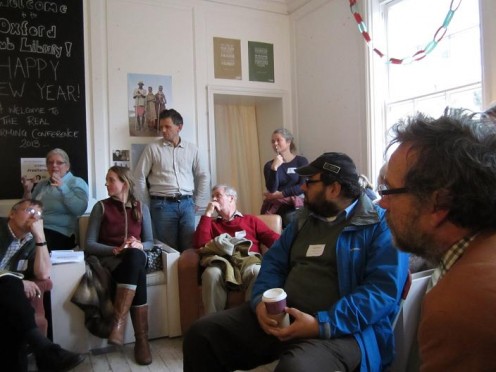 Steve Merritt launching a dual purpose chcken breeding network (Steve’s the chap looking out from the right hand side of the picture.

Steve’s conference session was to look into setting up a network of people breeding traditional dual purpose chickens (like our Light Sussexes, Rhode Island Reds and Buff Sussexes, but also including other breeds such as Buff Orpingtons – which look very interesting) for their original purpose of being both meat and egg laying breeds. Apparently they have often been bred for showing rather than utility in the past few decades, and have lost some of the characteristics that made them so useful, ie laying a good number of eggs and being good meat birds.
Steve explains in more detail here:
http://www.welshpoultrycentre.co.uk/Production/Poultry-breeds-and-their-future.html
It is easy to send fertile eggs by post these days, indeed many of our chickens were delivered in egg form! I signed up straight away and I’m really looking forward to working with others around the country on developing better utility strains of the dual purpose birds.
A modern meat chicken reaches maturity in 40 days (that’s less than six weeks) whereas a traditional bird takes 20 –25 weeks. The increases in the cost of feed means that the price of chicken is set to rise, and Steve spoke about the benefits of cover crops (which are often used to attract game birds) for chickens – a particular benefit is that they attract insects which chickens love.

Another interesting gentleman I spoke to over a coffee was Richard Higgins. Richard runs the Well End micro farm in London and has developed and published details of Sir Albert Howard’s original composting techniques. Sir Albert Howard was one of the founders of the Soil Association, a real organic pioneer. Richard had sold out of books by the time I met him, so I’ve just emailed him to see if he has any more! 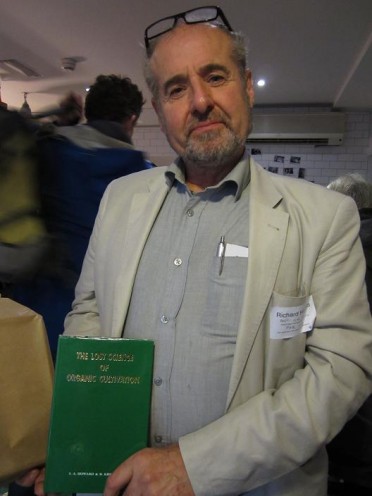 Richard Higgins with his book