January for me has been lots of crisp mornings with a biting wind but some fantastic big blue skies. 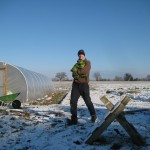 During one sunny spell a bumble bee flew by as I was harvesting chard leaves – probably a queen emerged rather early from hibernation, thinking it might be spring and looking for somewhere to live. There are cherry trees flowering on Playford Lane, so it wasn’t just the bumble bee that was confused.

When the cold weather did arrive, one of the main challenges with harvesting was to dig up root crops for the boxes whenever the ground wasn’t frozen.

Digging up parsnips reveals that there is an encouraging number of earthworms doing wormy things beneath the frosty soil, and also provides some freshly dug soil for the pied wagtails that come and look for insects.

The heavy snow prevented harvesting for a week in mid January, but when the thaw finally came, the broad beans seemed to recover reasonably well and the winter greens now have a chance to really get going with the gradually increasing light levels. 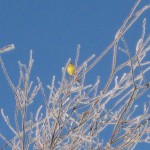 Yellowhammer in a frosty tree

Meanwhile, the party of starlings continues to provide a noisy soundtrack from the telegraph wires over by the lane, while the bold female blackbird by the shed pays regular visits to check on me as I do the veg boxes. A few fieldfares have chuckled their way through, and the resident skylarks are still singing occasionally. A few great tits and chaffinches are trying out their songs, interrupted by passing flocks of long tailed tits now and then. Other notable birds spotted this month include  the resident yellowhammers (amazingly bright yellow against the blue sky), songthrush, sparrowhawk, kestrel, a solitary lapwing, and most excitingly Stuart identified a barn owl at last Saturday’s working party. Indeed, we are hoping to have a Suffolk Wildlife Trust barn owl box installed on the big oak tree at the top of the field in the next few weeks! 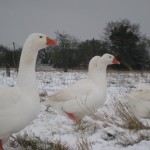 I think these fellas would see off even a very hungry fox!

A fox hole has appeared along the hedge near the gate so we’ll be keeping a close eye in case he or she is eyeing up the poultry.The geese, pigs and chickens seem more or less oblivious to the cold. The pigs have done an incredible job turning over their new patch of ground (more action for the pied wagtails) and this will be crucial for the new growing season. The diversity of crops and the integration of livestock is hugely beneficial to a whole range of wildlife. I hope this can be illustrated by many interesting wildlife sightings over the course of the year. The hens are starting to lay more eggs now that the days are starting to lengthen, and I’m looking forward to witnessing the changing seasons. Roll on Spring!