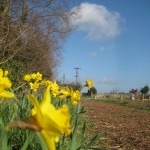 April has been a much better month in terms of both weather and wildlife, not to mention growing veg! Winter finally ended, the daffodils finally flowered, and some of our migratory birds have arrived for the summer. I’ve been amazed to see how quickly and closely our crops respond to the temperature and light levels; something Joanne has been saying all along, but I for one never really appreciated what she meant until I saw it happening day by day. 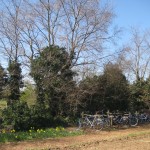 There have been some really fun and productive work parties and a definite positive vibe has arrived with the warmer weather. Spring has finally sprung and we’re hoping for an improved harvest this year after the dreadful weather conditions we suffered last year!

The barn owl has been spotted occasionally throughout April but it is unclear whether it has nested in the box kindly installed by Suffolk Wildlife Trust. This graceful and silent bird tends to hunt up and down across the top of the field before flying over a particular spot in the hedge near the gate and heading north over the fields. 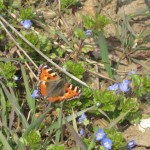 There have been an encouraging number of small tortoiseshell butterflies flitting about the field, and several small whites. Warm days in the middle of the month saw further butterfly species, a peacock sunning itself in the grass, and a bright yellow brimstone flying powerfully along the hedgerow.

A damp morning towards the end of the month was cheered considerably by the arrival of The Oak Tree Farm’s first cuckoo of 2013, not in the field but close enough for the eponymous and unmistakable call to be clearly heard from the shed. A little later that same morning, while diligently harvesting salad leaves in the polytunnel, I heard the mewing cries of a buzzard. Abandoning the spinach momentarily and dashing hurriedly out for the binoculars, I found no less than four of these magnificent birds of prey circling almost directly overhead in a suddenly blue sky.

The skylarks are performing their impressive territorial song-flights more energetically than ever, while the first wave of swallows has arrived, swooping  low over the field, hedges and polytunnels with their beautiful tail streamers and distinctive song. 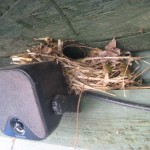 The wren’s nest on the CSA shed

Greenfinches, goldfinches, dunnocks and chaffinches have been joined in the hedgerow by a number of blackcaps, while the blackbirds have finally found their voices – together creating a true summer soundscape. One very determined wren has built a nest right next to the door of the CSA shed. This plucky and very dapper looking bird has been flying in and out of the hedge collecting nest material, defying photography and occasionally diving into thick cover to deliver his astonishingly loud song.

That’s all for now. Look out for next month’s instalment!