Last month Joanne travelled to the Picardie Region in northern France to learn about French Community Supported Agriculture, and also to ask vegetable growers how they are coping with our changing climate. Sincere thanks to the Grundtvig Programme for paying her travel expenses, and to Richard who took the lovely photos in this trip report, as well as to all the people that we met for their generosity and warm welcome!

A Community Supported Agriculture scheme in France is known as an “AMAP”, or an “Association pour le Maintien d’une Agriculture Paysanne”. It really doesn’t translate well, but it is along the lines of an association that supports small scale, local agriculture. If you feel like stretching your French reading muscles then take a look at this definition of an AMAP.

An AMAP Association is organised by volunteers who recruit new members and organise the distribution of produce, with a single volunteer interfacing with each producer. Members are invited to visit producers from time to time, and may be invited to lend a hand for specific labour intensive jobs, such as potato harvesting or tree planting, but they don’t routinely get involved in growing work as with some UK CSAs. Here at The Oak Tree we very much depend on CSA members’ work to produce our food. AMAP members, known as AMAPiens, sign up for a season and pay in advance to help even out the producers’ cashflow.

Here in the UK we are only just now working on a national definition of a CSA, and there are far fewer UK CSAs than French AMAPs. Perhaps this isn’t surprising as France has always been proud to retain a healthy and vigorous small-scale farming scene. Remember French Farmer Jose Bové dismantling a McDonalds in France? I’m not saying he is typical, but he did attract quite a bit of popular support, and he is now in the European Parliament.

We met two AMAPs on our travels, both with impressive and informative websites AMAP Art de Terre  based in Rue and the AMAP du Potager based in Amiens. There are many more AMAPs even in the Picardie Region. Picardie is a truly beautiful region, conveniently close to Calais for the UK traveller, and considerably warmer than even hot, dry Suffolk! The crops were about a month ahead of the UK, but the growers complained about the same delays in the spring that we experienced here and they reckoned that their crops were about a month behind where they would normally be.

First we met the lovely Agnes Degand, who very kindly showed us round the three market gardens that she looks after with her husband and other members of her family, producing vegetables for the AMAP du Potager. 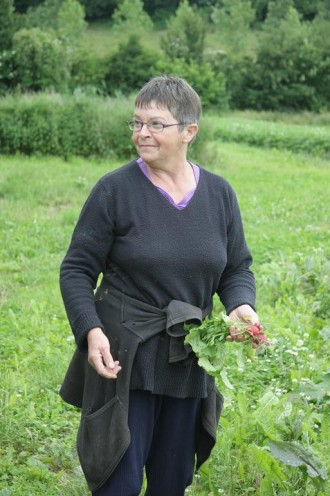 The Degand family are clearly very experienced growers, something that is relatively unusual here in the UK as vegetable production has (in general!) either been shifted overseas, or moved to far bigger field scale production. Or maybe that is just how it looks here in Suffolk, surrounded by industrial agriculture as we are at The Oak Tree. 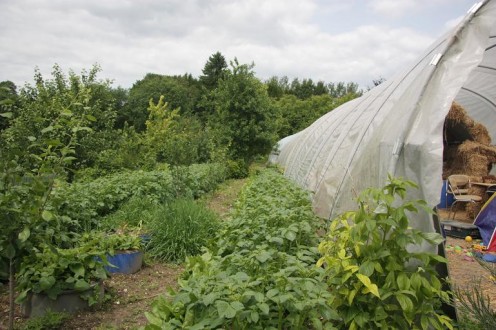 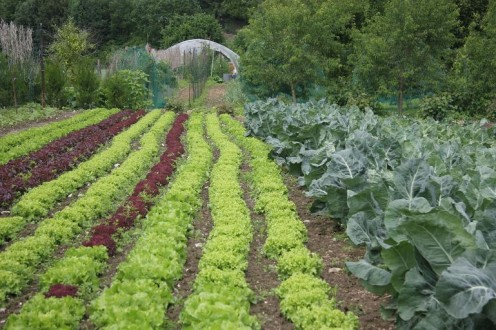 Agnes is a great fan of integrating flowers, trees and bushes into the vegetable garden to benefit the vegetables as well as to be able to offer fruit to AMAPiens (as AMAP members are known). The trees will also offer protection from summer heat to more delicate vegetables. 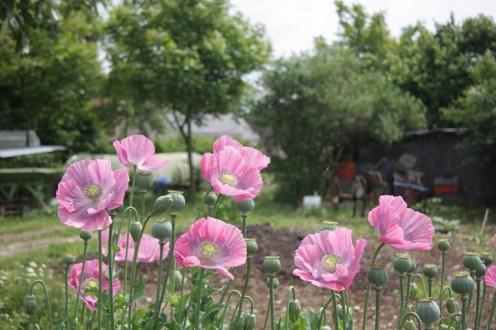 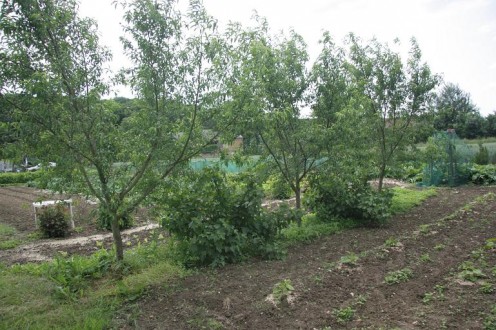 From time to time Agnes with include a pot of jam in the winter vegetable “basket” made from the glut of late summer fruit!

One interesting feature of the Degand gardens is this storage clamp within a polytunnel. This is rather more sophistcated than the straw and tarpaulin affair that we’ve used at The Oak Tree, and is used to store squash, spuds and root veg into to winter protected from frost and with a nice even low temperature.

This was a real wake-up call to me as I had heard reports of it in the UK, but I have never personally had problems with it. Leeks are such a  winter staple that losing them would be a real disaster. Agnes explained that they use mesh lifted off the ground with home made supports to protect the plants throughout the flies’ lifecycle. We shall do the same at The Oak Tree as it seems that the pest is spreading in the UK.

CSAs in the UK have many different ways of getting their produce to their members, but AMAPs generally have central a pick-up point where members go to collect thier “baskets” (what we would call “box”) of veg, and often other produce too, if they wish. Members weigh out the specified quantities and get a chance to chat to the producers. 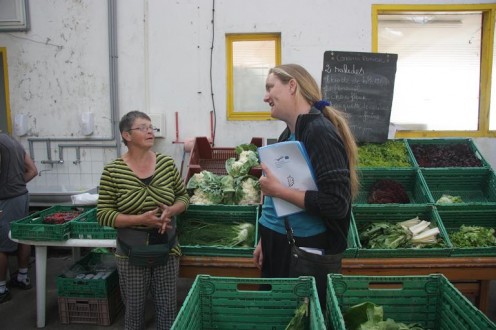 Agnes and Joanne chatting at the Amiens distribution point.

We also met a very interesting lady who makes bread from the wheat that her farmer father grows, which she now sells via the AMAP du Potager alongside Agnes. We’ve made some first steps to milling our own wheat there at The Oak Tree with our exercise bike mill, but I have alway been curious to find a good quality larger grain mill, and this lady explans that they use a Type Astrier mill – but there is a long waiting list for these machines! 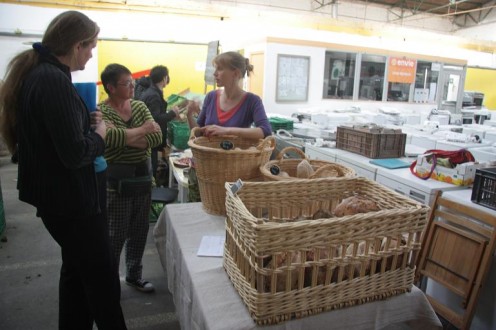 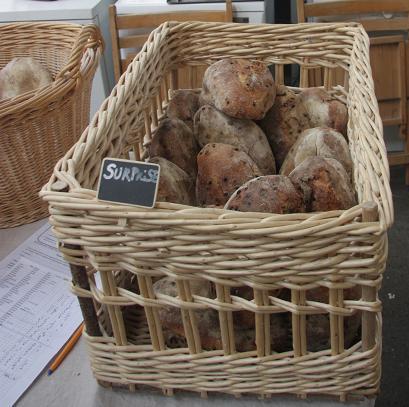 The suprise is chocolate chips!

We next visited the AMAP Art et Terre, meeting both the Association, and their grower Florent Boulanger, at the distribution point in Rue. 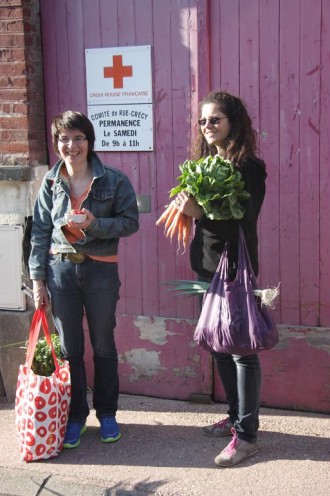 AMAPiennes collecting their baskets in Rue

Claudine Bonnigues, volunteer from the AMAP association, explanined how the AMAP worked, and joined Florent, Richard and I on a tour round Florent’s market garden which was very impressive! Florent worked in an engineering consultancy before moving into growing, and this expertise showed with his selection of home made implements and tools. Truly, Richard and I were at times speechless at his innovation, and very inspired to have a go at something similar ourselves!
Florent had followed some training in order to be eligible for grant funding from the regional authority towards some of the market garden’s impressive infrasturcture, including some enormous (to me!) polytunnels. 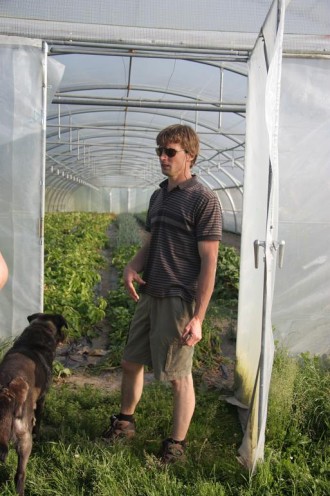 Florent, and his amazing polytunnels

Crops were about one month ahead of the UK

The first of Florent’s home made gadgets which Richard and I admired was this home made wheelhoe. Wheelhoes used to be widely manufactured in the UK (and no doubt in France too) but now the only supplier I have come across is Swiss Glaser. They are great tools, we have one at The Oak Tree, but they are very expensive. Florent recommeded a sharpened bandsaw blade for the hoe blade, and he suggested that you could make the frame with a child’s bike. 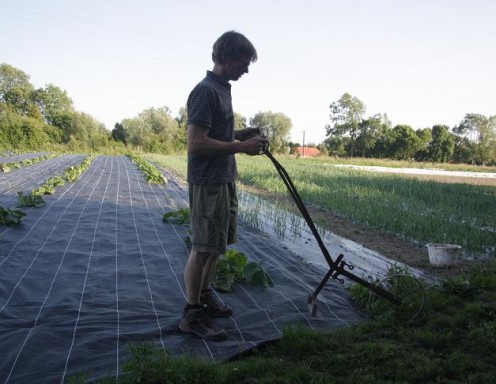 Florent with home made wheelhoe 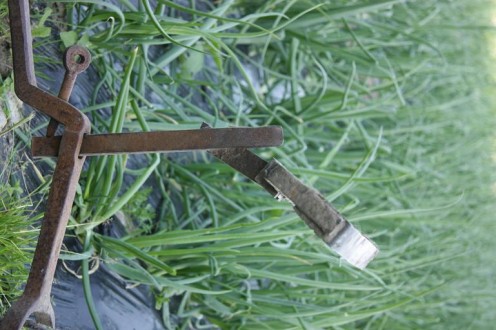 Close-up of the home made wheel hoe

Florent’s garden is very close to the coast so doesn’t have the extremes of temeprature that Agnes experiences further inland, but they do suffer some lots of wind. This can be a significant problem for the crops, but tree wind break planting has proven tricky due to deer damage. Florent uses a great deal of weed control plastic between his crops, for example the woven polypropylene that he uses here between squash. This mostly works well, but the wind can spin the plants round causing damage around the stems against the plastic. 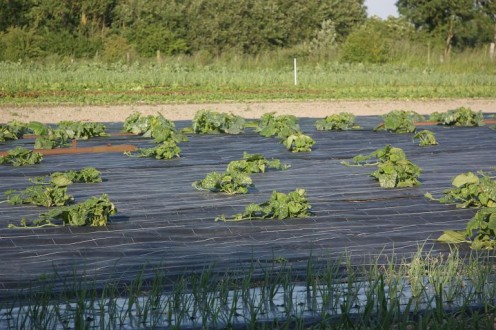 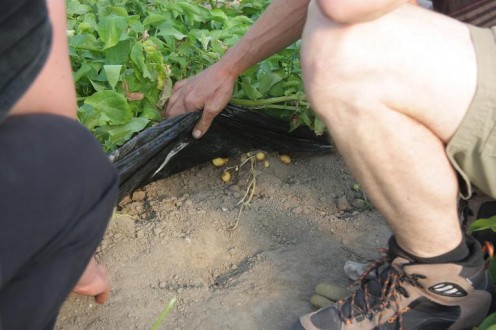 These early potatoes are grown immediately under the non-porus black plastic, protecting the developing potatoes from greening in sunlight, making them easy to harvest. They are drip irrigated. 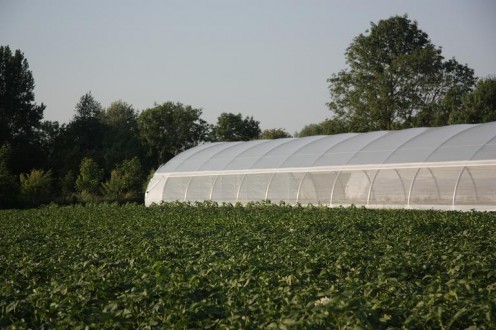 Here are a couple more gadgets that caught our eye. 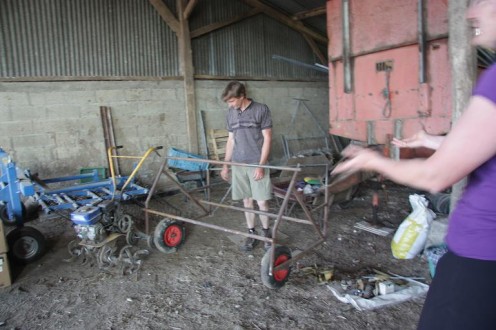 For laying out and rolling up weed control plastic & mesh 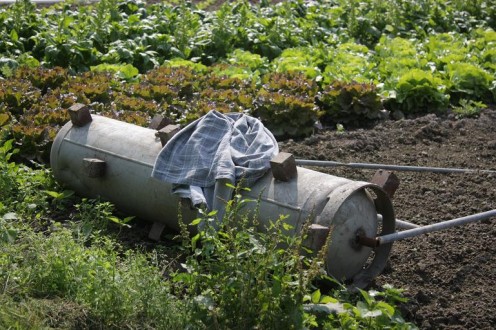 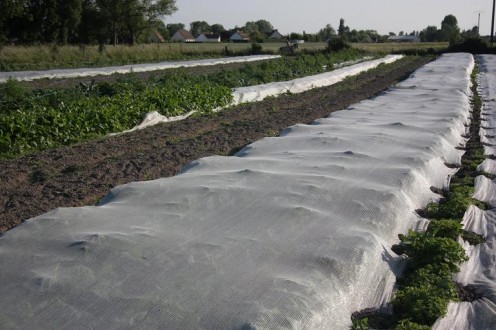 Using soil to pin down mesh

Organic certification was important to French AMAP members, and the quality of the food was certainly an important factor in members choice to join an AMAP. The growers all clearly work extremely hard to achieve the impressive crops that they do, and I am very grateful to them all for such a kind welcome and being so generous with their time.