Homo sapiens in large numbers on the leek bed

Once again a busy month work-wise, so fortunately there have been lots of humans on the farm. The swifts left in the first week of August – roll on next May; I miss those wonderful birds already! The swallows and housemartins are still very much in evidence and in fine song, the youngsters testing out their flying skills in preparation for their journey south. A few parties of long tailed tits have been seen making their way along the hedgerow, while all our common resident birds on the farm have been sighted, although they are largely quiet at this time of year.

We are still unsure whether we have a resident barn owl (Suffolk Wildlife Trust will be carrying out another monitoring visit in September), but one has been sighted at the top of the field on numerous occasions. Meanwhile the little owls – of which there are at least two – have been very vocal in the late afternoon and early evening yapping madly on occasions but managing to stay invisible! Also very vocal recently was a jay in the small wood at the top of the field, the raucous screeching noise is one to listen out for. There have been several buzzard sightings over the course of the month as well as a grey heron passing over.

Clouded yellow butterfly – an exotic migrant from the continent!

The most exciting wildlife for me was our two migrant butterfly species, both present this month. Clouded yellows were a common sight out on the pasture, and several painted ladies were seen along the north hedgerow. With the summer we have had, it has been a good year for these species making it as far north as the British Isles. Small tortoiseshells are still present in abundance, along  with all the other common summer species including peacocks and red admirals. 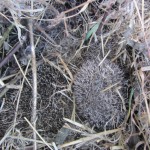 Hedgehog family refusing to be photographed

Mammals have been a bit of a feature of the month, with a muntjac munching on some of our sweetcorn, and a stealthy stoat stealing some of our precious chicks, while these camera-shy hedgehogs were found in our straw and carefully re-homed to the hedgerow.

So summer is officially over, although it seems it will linger, much as last winter did. What will autumn bring? Find out here next month…