Why our 12 acres are important

At present the CSA is only able to stay afloat thanks to grant funding from The Esmee Fairbairn Foundation and others, and by myself and Tom being prepared to work on a self-employed basis for only £750 per month each. If the farm didn’t receive external funding we would have gone bankrupt by now, and even with funding support the situation is tight. Our aim is to become financially viable within the next two years; otherwise we are little more than a nice novelty project. Rather we want to demonstrate a genuine alternative to the industrial agriculture status quo. It is increasingly obvious that “normal” fuel-intensive farming is just not sustainable (in every sense of the word).

To do this we plan to expand our membership, and slightly increase our weekly veg share price from £7.50 to £8 per week in our new CSA year from June 3014 to May 2015. If you would like to join the CSA we will be launching new membership at our farm tour on Saturday 28th September, and from that day membership forms for new members will also be available here on our website. Our current membership is 38 shares; we plan to increase to 54 shares from June 2014 and we (tentatively) plan to make one final increase in membership to 72 from June 2015 – but that is a long way away so nothing is set in stone. We already have a waiting list, so new places for next year are likely to fill up fast!

By pulling together and realising the many benefits of producing our own food, all while sequestering carbon in the soil and making a good home for wildlife, I believe that, as a community, we can create a real alternative. Frankly, if we want the next generations to inherit soil that is usable, and a climate that is habitable, we don’t have much choice… 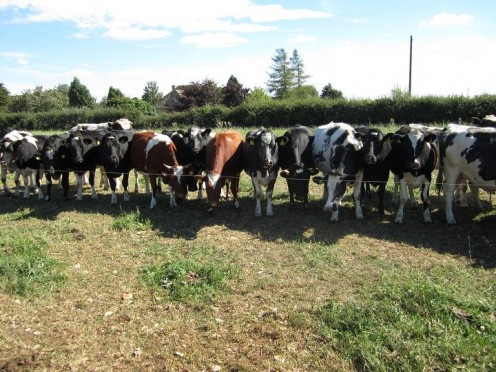 These cattle sequester carbon in the soil: We are going to get two at The Oak Tree to show Regenerative Agriculture in action

I gave up earning a good living as an engineer to dedicate my life to sustainable farming, and I have worked extremely hard for the past four years to get to where we are now. Many others have put enormous amounts of effort and dedication in to The Oak Tree alongside me.

To me there is simply no other option but to do what we can to transform our agricultural system to something more sustainable. I believe The Oak Tree could offer a unique model of how this can be done.

I’m going to leave it to writer Colin Tudge, who visited The Oak Tree earlier this year, and is a friend of the farm, to explain why what we are doing matters, in this extract from an article in the Guardian:

“… report after report – the kind governments and big organisations choose to override – tells us that the best way to ensure that everyone is well fed, sustainably and securely, is through farms that are mixed, complex and low-input (quasi-organic). These must be labour-intensive (or there can be no complexity), so there is no advantage in them being large scale. Such farms are traditional in structure, but they need not be traditional in technology. They would benefit from good technologies and science.

But the small-to-medium mixed farms that could feed us well and provide good jobs are absolutely at odds with the modern perceived imperative to maximise wealth. To survive in the fight for profit, skilled labour must be replaced with big machines and agrochemistry; the husbandry must be simplified – monoculture rules – and all must be done on the largest possible scale. Although industrial farming doesn’t feed everybody, has led to mass unemployment and the poverty and despair that go with it, and is wrecking the fabric of the world, it must prevail because it produces piles of short-term cash for the people who are calling the shots.”

I believe that our unique combination of sustainable, labour-intensive agriculture and community supported agriculture offers a way for us to run a successful ecological farm even in the current climate of perverse subsidies and food regulations that penalise the small-scale farmer. When people see this for themselves on a real, working farm, no one can then convince them that it cannot be done. 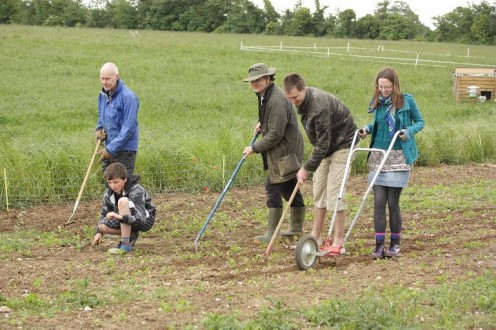 The Common Agricultural Policy subsidy system is heavily weighted against us: we receive no farming subsidies, not even environmental stewardship payments. Other regulations are also tipped heavily against us, such as planning rules, not to mention excessive regulation of food businesses that make it extremely difficult to run a small mixed farm.

I take every opportunity to shout about all this red tape. Big agro-industry doesn’t want the status quo threatened. We are told we need GM or the children will starve. I don’t believe that.

The mineral content of veg has plummeted over the past few decades. Obesity and degenerative diseases are rife in our society, which increasingly seem linked to an over industrialised diet. Food is wasted in obscene quantities, yet the supermarkets’ bins are locked, sprinkled with broken glass or polluted with bleach, to stop people from using the still perfectly edible food. Pigswill, the staple of pigs through the ages, and an excellent way to reduce food waste, is illegal. 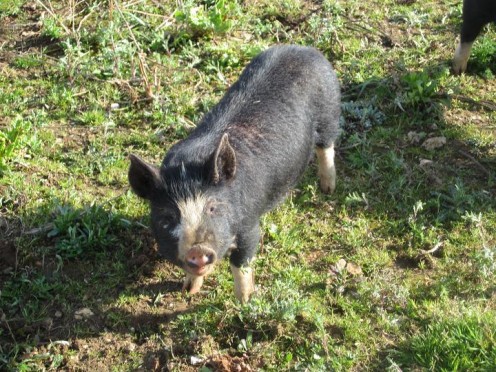 No swill for you, young porker! It’s illegal…

And even stepping away from the food system for a moment… increasingly people feel isolated. Depression is a virtual epidemic, with all the crippling effects that it can have – surely in part (and only in part) associated with the fragmentation of communities.

I never expected that all these issues would become so urgently associated with thesmall plot of land I bought four years ago. But they most certainly are now. I’m not alone worrying about all this, and most of all, in actually doing something about it. 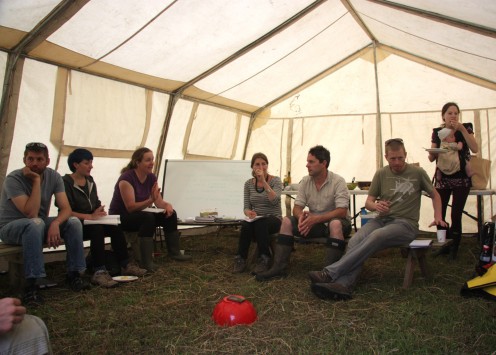 Our little farm community is full of people who really care about the food system and are prepared to do something about it (though ranting is far from compulsory amongst farm members; many members simply want to spend time outside in good company, or teach their children where food comes from!) Increasingly, we are in touch with other people and organisations who think along the same lines, and are willing to help. So while the situation looks ever more worrying, there is a rising tide of energy doing something about it!

Despite the challenges (of which there are many) of running a small community farm in a genuinely sustainable way I can’t think of a better of spending my time as we head into an uncertain future.