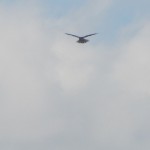 September is always a relatively quiet month for wildlife. The last of the summer migrants were still around, indeed summer seemed to continue right into October with the bright and mild weather. A kestrel hunts over the pasture on most days, while the little owls are just as vocal and just as invisible as they have been throughout the summer.

A notable new arrival is a large number of meadow pipits. They appeared in flocks towards the end of the month and are now regularly heard in the hedgerows and pasture.
The clouded yellows became a gradually less common sight but small whites are still flapping around the brassicas while there have been several red admirals and speckled woods on the wing around the tea area.
And as the last of our summer migrants depart, we look forward to the arrival of redwings, fieldfares and other winter visitors to our farmland.

Autumn is a great time of change both in the crops we are growing and in the wildlife we see. This fantastic rainbow is a reminder of the beauty and transience of the different aspects of the natural world around us. Tune in next month as autumn truly arrives…
Share if you like!