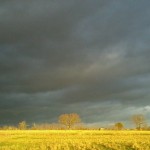 It may have been the wettest January for a long time, but it has been very mild and there has been some sunshine. This picture of the pasture in early evening shows just what winter sun can do on occasion!

Being largely wet and windy there has been little wildlife of note. Some voles were found during one of the winter tidying jobs. They were sheltering under some planks of wood and we attempted to relocate their hideaway so we hope they are still cosy! The visiting wild geese have still been hanging around off and on, sometimes daring to antagonise our resident geese and generally getting in the way.

Some of our resident birds are starting to practise their songs for spring already, probably on account of the mild weather. Chaffinch, greenfinch and songthrush have all been heard on a regular basis, joining the high pitched robin and the tinkling song of the goldfinch that have been evident throughout the winter. 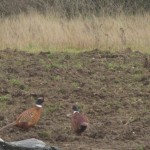 A green woodpecker was also around at one stage, its distinctive ‘yaffling’ call came from the top end of the field but I didn’t manage to catch sight of it. A great many woodpigeons are in evidence, looking hungily at our (well protected) brassicas, while quite a few pheasants have been strutting their stuff on the fallow veg beds.

Meanwhile the skylarks and meadow pipits can both be seen and heard further up the field. We hope that when the pasture finally starts being grazed when the cows arrive this won’t disrupt their nesting too much.

I think I might have said this before but roll on spring!