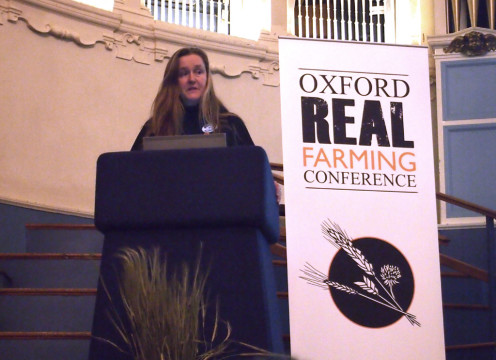 Joanne talked about the low-carbon aspects of the Oak Tree, not just in terms of our carbon inputs but also about sequestering carbon in the soil. In a second session with the Landworkers Alliance on appropriate technology we talked about some of the remote monitoring and cameras we use on the Oak Tree. Here is a clip of her summing up at the final plenary session, reflecting the energy and excitement about the ORFC.

In contrast to the good people at the OFC who knew size matters, here at the ORFC most people knew that they didn’t know all the answers at all, but were avidly engaged in the business of finding out and sharing skills and discoveries.

The ORFC was much bigger this time than it has been in past years, indeed Colin Tudge (who inspired the conference about six years ago) was able to report that the ORFC was larger than the OFC this year. The ORFC was held in the baroque Oxford Town Hall, with its reminders of earlier times when people were a little more aware about where their food came from, with the foliate heads and sheaves of corn celebrating the fecundity of the land. 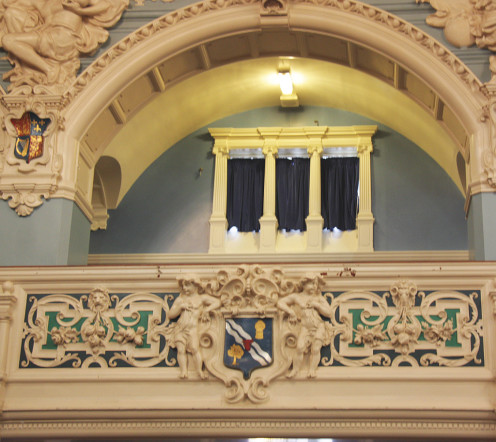 foliate heads and sheaves of corn in the plasterwork

One of the apparent highlights of the OFC, however, was a humdinger of a speech by George Monbiot, who contrasted the actions of the Coalition at capping individual benefits at £26,000 p.a. while at the same time electing not to impose a cap of ten times that much on farm Basic Payments (farm subsidies ultimately paid for by the consumer or taxpayer) in England.The fundamental question he asked was

“What do the rest of us 99.7% who do not farm receive in return for farm subsidy?”

Those who benefited the most were already the richest people in society, he argued, as he examined and dismissed the justifications given for subsidy, including food security and environmental benefits.

The £3billion spent on farm subsidy in the UK equated to £245 a year per household, he pointed out.

“There are some very, very rich people receiving an awful lot of money every year, sometimes into the millions.”

It was a barnstorming speech, and you can see it below.