Joanne Mudhar was the original owner, manager and grower at The Oak Tree Low Carbon Farm.

I grew up less than a mile away from The Oak Tree Farm, in Rushmere-St-Andrew, and I showed early interest in gardening at the age of eight when a mouse discovered the compost heap I had been carefully tending in my wardrobe! 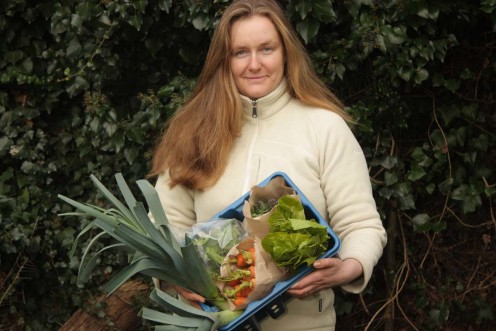 But life took me in a different direction, and away from Suffolk, for a few years. I graduated in Maths from Cambridge University in 1988 and worked in the rapidly growing IT industry. But alongside the day job another interest was developing… in my mid 20s I saw a copy of John Seymour’s “The Complete Book of Self Sufficiency” in a bookshop. I resisted buying it as I knew my life would never be the same if I did. I held out for a fortnight and then cracked, bought the book, and never looked back!

I was used to being the only women engineer in the companies I worked for, and I so I was well prepared for becoming the only woman plot holder on my allotment field at the age of 25! Allotment holding was far from “cool” back then in the early 90s, and I became accustomed to being told that I wouldn’t be able to manage by the “old boys” – every allotment field has them! To be fair, they had a point – it took me a few years to overcome the weeds and learn to tend my soil and precious vegetable plants, and like every gardener I am still learning to this day.

Meanwhile, I gained an MSc in Environmental Management part time in the evenings, and became increasingly concerned about the very real threat of climate change. At the time I was working on the user interface code for mobile phones in my day job, and experienced a “road to Damascus” moment when I thought, “what on earth am I doing here?” while staring at a mobile phone screen, given the threat of climate change, mobile phones hardly seemed top priority!

I moved to France, learnt the language, and took a Master’s degree in Renewable Energy Systems on the beautiful island of Corsica. I then spent a few years developing Wind Farms in France, while nuturing my 2.5 acre smallholding in fertile Normandy in Northern France.

A couple of years after returning to the UK, I bought the field which became The Oak Tree Low Carbon Farm. The Oak Tree is the fulfilment of my dream of many years, the opportunity to marry my two passions of environmental care and growing food. Our community supported agriculture scheme is a living experiment in how to produce good food with the lowest possible environmental impact, while having a fantastic time too!